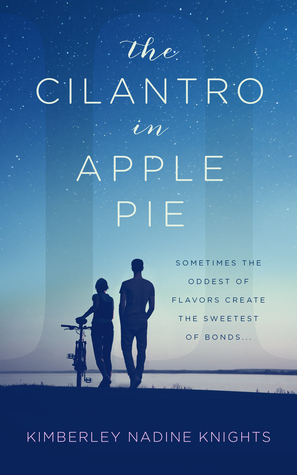 Fragnut. Confused? Well so is everyone else at Lumiere Hall Prep when sixteen-year-old Rubie Keane rolls in from Trinidad and Tobago talking her weird lingo. Not that she minds the culture confusion; she’s determined to leave the past behind her and be overlooked—but a certain stoic blue blood is equally as determined to foil her plans.

Gil Stromeyer’s offbeat personality initially makes Rubie second-guess his sanity, but she suspects his erratic outbursts of violence mask a deeper issue in his troubled, charmed life. Despite his disturbing behavior, a gradual bond forms between the two. However, on the night of the annual Stromeyer gala, events unfold that leave Rubie stripped of her dignity and kick Gil’s already fragile world off its axis.

Both their well-kept secrets are uncovered, but Gil’s revelation proves that sometimes the best remedy for a bad case of lost identity, is a dash of comradery from an ally packed with flavor.

Quick Reasons: there’s romance, but it’s SUCH a small part of the novel you won’t even realize it’s there until the very end when it’s brought up; awesome, diverse relationships; the friendship between Rubie and Gil? I need that in my own life; adorable characters, quirky language; quick, endearing read; these characters have kick—and I adored them

Huge thanks to Kimberley Nadine Knights and Ravenswood Publishing for sending me a copy of this novel in exchange for an honest review! This in no way altered my read of or opinions on this title.

I think what I liked most about this book was the romance-free plot. I mean, okay, there was mention—near the very very end!–of a crush, but overall, this book? Totally driven by friendship, not love. And I adored that; it’s not often you get a contemporary YA that doesn’t have some sort of romance, love-triangle, heart-related drama fest…you know what I’m saying here, I think. It was different, and I LOVE different. And the no love thing? Totally worked for these characters. This book was written so brilliantly, I wasn’t even hoping for a romance to liven things up—it wasn’t necessary to the plot, it wasn’t necessary to the characters, and I didn’t miss it even once.

These characters are quirky, diverse, and so very easy to relate to. There’s a ton of drama, mystery, and flair to the writing. It sucked me in from the first sentence, and kept me hooked throughout. The glossary at the beginning of the novel also definitely helped…and came into play in the story, which was an awesome way to round it out! It wasn’t just a glossary, but part of the budding (and, at first, mostly unwanted on one side) friendship between Gil and Rubie.

I particularly loved the different types of relationships cultivated throughout this book—especially that between Rubie and the three Stromeyer brothers. All of the characters are well-rounded, beautifully written, and redeemable in the end. Every character exhibits a form of growth and self-discovery. Every character is given their own story, their own focus, and their own well-crafted journey; I really appreciated the amount of focus and dedication Kimberley Nadine Knights showed toward each of these complex, diverse personalities. It is obvious the author knows people ( i.e. her characters) intimately, and can realistically capture their essences on a page.

There’s an interesting perspective shift around the 60% mark that was both unexpected and, somehow, really awesome. It only lasted two, maybe three, chapters…but brought about a sense of completion to a character we might otherwise have felt a bit jilted on…and also helped to “tie up” any loose ends that might otherwise have cropped up.

Overall, this was an endearing, adorable, quirky read…and you guys NEED to pick it up. I particularly recommend to lovers of contemporary; diverse characters; and very minimal (almost nonexistant!) amounts of romance in their YA. This book had JUST the right amount of snark and sass; I can’t wait to see what awaits us in Kimberley Nadine Knights’ writing future!

7 thoughts on “The Cilantro in Apple Pie: Quirky, Diverse, and Beautifully Romance-Free”