This blog tour is hosted by:

Vine superstar Lele Pons—“one of the coolest girls on the web” (Teen Vogue)—teams up with #1 New York Times bestselling author Melissa de la Cruz (The Isle of the Lost) in this lovable debut novel about the wilds and wonders of high school that’s as laugh-out-loud addictive as Lele’s popular videos. 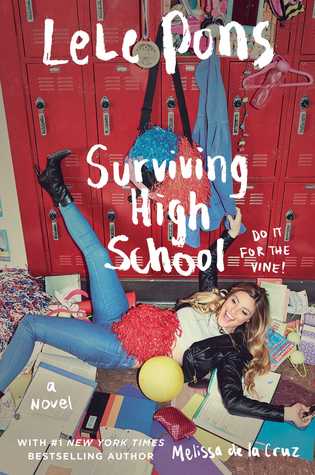 Ten million followers and I still sit alone at lunch. Lele is a bulls-eye target at her new school in Miami until, overnight, her digital fame catapults the girl with cheerleader looks, a seriously silly personality, and a self-deprecating funny bone into the popular crowd. Now she’s facing a whole new set of challenges—the relentless drama, the ruthless cliques, the unexpected internet celebrity—all while trying to keep her grades up and make her parents proud.

Filled with the zany enthusiasm that has made Lele into Vine’s most viewed star, this charming novel is proof that high school is a trip. From crushing your crushes (what’s up with that hot transfer student Alexei??) to throwing Insta-fake parties with your BFFs and moaning over homework (GAH) with your frenemies, high school is a rollercoaster of exhilarating highs and totally embarrassing lows. Leave it to Lele to reassure us that falling flat on your face is definitely not the end of the world. Fans of Mean Girls will love this fun and heartwarming fish-out-of-water story.

Get a copy here!

Quick Reasons: ohmah penguins, I love this character; snarky, quirky, my type of narrator!; this is a coming-of-age like you wouldn’t believe; tackles the topic of “internet fame” and how to handle the pressures that come with it; it’s like I looked into this character’s head…and the journey was amazing; this is laugh-out-loud funny

Huge thanks to: Lele Pons, Melissa de la Cruz, Gallery Books Publishing, Netgalley, and Giselle @ Xpresso Book Tours for hooking me up with early access to this title in exchange for an honest review! This in no way altered my read of or opinions on this book.

First and most importantly: this book is hilarious! I giggled pretty much throughout the entire read. I snorted, in a very unladylike and gross way, several times too many. I gave myself a gut ache trying to reign in peals of hyena-esque cackling. I just couldn’t help myself; this book made me laugh, a LOT…and that’s a huge deal for me.

The characters, particularly our MC Lele, are quirky, unique, independent…and more realistic than practically any other character I’ve ever met. Lele especially gave me Bella-esque, awkward innocent cinnamon roll feels… except Lele has a huge personality to stand on, and gives literally no cares at all to what the rest of the world things. She is, at current, my literary hero—because she knows how to be herself, and not let the world knock her down. She doesn’t let the world change her, and I think this is a really important message for girls to be hearing (er…reading) right now. Let me repeat that: this book tells readers that it’s OKAY to be weird, to be different, to be unique. In fact, it’s more than okay—it’s what should be!

Of course, the rest of the cast in no way fade into the background. Each character has their own growth story, their own sense of “selves”…and their own individuality. No two characters came off as “the same” or even “similar” (except the Whatevers, the Clique, the…group of girls that throughout this book never actually gets a name). Lele, of course, IS the star—and with the fame comes exactly the sort of overly dramatic, over-the-top, always jumping to snap judgments fiasco you’d expect from a teenage internet sensation. But at the end of the novel, Lele finds herself…and realizes that internet fame, perhaps, is not the “icing on the cake” she’s always believed it to be. In fact, it’s downright stressful, at times.

I really ADORED the pop culture references scattered throughout. Literally every page has at least one, if not several, such references—always thrown in with flair and pizzazz. This made the read both relate-able (for me, at least, as I understood every reference made—win on my part!) and surprising—I never knew what would crop up next! The writing is entertaining, the humor is SO spot-on, and the morals (while a bit shaky in some places) are also pretty well-done.

I had a blast reading through this “fictional memoir,” as Lele Pons (the author) calls it in her prologue, and cannot wait to see what the future has in store for her in terms of bookish endeavors! I highly recommend this read to lovers of pop culture, snarky yet lovably awkward characters, and humorous prose. This book will bust your gut with laughter from page one—pick it up and get lost in the sensation that is Lele Pons!

Two lucky winners will receive PAPERBACK copies of this hilarious and wildly entertaining read!  Interested in being entered for a chance to snag your own?

Click here to go to the GIVEAWAY! (US participants only)