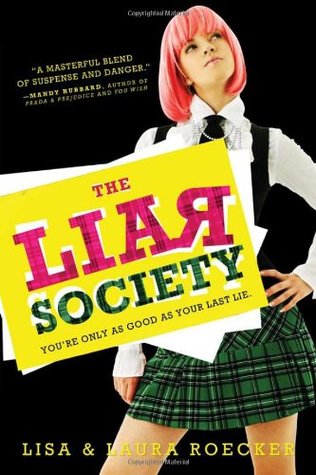 Kate Lowry didn’t think dead best friends could send e-mails. But when she gets an e-mail from Grace, she’s not so sure.

Now Kate has no choice but to prove once and for all that Grace’s death was more than just a tragic accident. But secrets haunt the halls of her elite private school. Secrets people will do anything to protect. Even if it means getting rid of the girl trying to solve a murder…

I went into this book WANTING to love it. I’m a huge fan of ABC Family’s Pretty Little Liars, and this book seemed to have something similar going on with the story: a tragic accident, a death, mysterious and ghostly emails…

Now, don’t get me wrong—there’s a TON of mystery and suspense in this book! The main character is faced with rejection, outcast status, and about a thousand subtle (and, in some instances, not so subtle) threats; she handles the situation, and herself, with all the grace and poise I think I’d have loved to have myself at that age. In fact, I think I’d love to borrow her confidence and hard-headed, stubborn demeanor today, if I’m being totally honest! But parts of this book… They just didn’t work for me.

For one thing… Our main character, Kate, is completely OBSESSED with all things Grace (her friend that died). She just can’t seem to get over the fact that Grace is gone. In fact, when the emails start poring in, there are moments when she ardently believes Grace HAS to be alive because, “Oh, hey, she’s sending me emails!” This was what began my Pretty Little Liars deja vu; can anyone else say Alison DeLaurentis? I was fully expecting Grace to just randomly show back up one day. I can’t say I’m honestly disappointed that she didn’t; I don’t know that having her still be “alive” would have helped matters. But I was expecting it.

Kate also seemed almost unnecessarily paranoid about certain people/things…especially people/things that, in light of everything else, didn’t matter much. She goes out of her way to say she has no friends…but then she treats Seth, who is actually trying to be her friend, like crap—and she KNOWS she’s doing it?! I didn’t understand why, if she was so hurt about not having friends, she wouldn’t try to do something to change that (I mean, aside from “Oh, Grace is gone and I’m all alone here let me whine about it for the rest of forever because nobody else will ever understand me blahblahblah.”) She sort of annoyed me as a character, I think; I didn’t like or really connect with her on a deeper level.

Porter was roughly a seven out of ten on the hotness scale and had blood bluer than any color you’d ever find in a Crayola box.

I also felt like perhaps there were some missed opportunities in the writing itself. While I understand (now, having looked it up on goodreads and done a bit of research) that this is actually only the first book in a series, I’m not sure I like how the ending happened. She went to all this trouble to figure out the mystery, despite countless threats of bodily or emotional harm from unnamed sources….just for the whole world to go, “Eh. It happens. Move on.” ???!!!?!?!?!?!?!?!?!!!??? No? No, I just…

Don’t misunderstand me here; I KNOW it’s setting up for the other books in this series. I’m sure they’ll all loop together and come back to this in the end. BUT. But. I feel like the ending was a bit of a cop-out; the characters weren’t forced to come to terms with anything. There was really no major growth on the part of Kate. I just. The ending disappointed me, big time.

That being said, I DO feel like this might be more on my end than on the books. It was a quick, easy, and otherwise painless read. I was racing to the end to find out what happened, who the mystery nameless were, what exactly was going on! While I didn’t feel as if the ending quite satisfied my “need to know” the way I’d been hoping for, that doesn’t mean you as a reader won’t feel differently. The characters are easy to relate to, the prose is simple to follow, and the plot remains unwavering throughout. While it’s not my favorite read ever, I did enjoy it while taking the journey.

But I was not a normal girl.

I’d definitely recommend to lovers of mystery/suspense, shows like Pretty Little Liars, or reads such as Liars, Inc. by Paula Stokes. Definitely an entertaining and thought-provoking read!