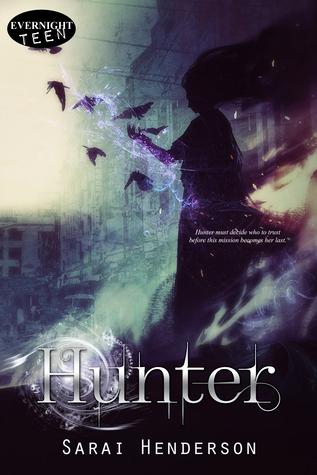 Sixteen-year-old Hunter belongs to the Telepathic Alliance for the Latent or Newly manifested, otherwise known as Talon, a bounty hunter community known for their ruthless tactics. Her latest mission in San Diego was supposed to be a piece of cake, but when the job takes a treacherous and deadly turn, not even her telepathic abilities could have warned her of the dangers lurking around the corner.

There is only one place for Hunter to go, and that is straight into the hands of the government and their Psychic Intelligence Team, but even the “normal” world isn’t safe. With each passing hour throwing her deeper into the game of life and death, Hunter must decide who to trust before this mission becomes her last.

A HUGE thank you to Sarai Henderson and Evernight Teen Publishing for sending me a copy of this title in exchange for an honest review! This in no way altered my read of or opinions on this book.

This was a super quick and overall entertaining read. I really enjoyed that the MC is a bounty hunter….who, in the end, gets a bounty put out on her. Her struggles to come to terms with the situation, and the idea that even her “family” can betray her in the end, were relatable and heart-wrenching. The snark was on-point; I could tell, even early on, that Hunter was a fighter, not a runner…and she fought hard throughout this read. The action was fast-paced, nail-biting, and filled with tension; I was enthralled from page one, a heavy need to rush to the ending, to figure out what was going on, to know what happened next.

The plot was super quick–sometimes a little TOO much, honestly. I felt like certain scenes were rushed through. Details were missed, the writing became a slew of “tell” instead of “show”… the ending, in particular, felt a bit stiff and contrived. It also effectively turned Hunter from an intriguing, stubborn, strong-willed character…into something of a special snowflake, which I don’t agree with. I felt as if the ending was, in a sense, just blotted onto the page–a Rorschach ink test meant to fill space and be taken at face value. It didn’t work for me.

There was also a LOT of unnecessary death throughout this book. Hunter herself kills several key characters, and while I understand that in her situation it was a necessity–kill or be killed–there were a few other character deaths that I don’t feel added anything to the story line except a “stronger” will power in Hunter. I would have preferred the bigger character death to be written a different way–or not at all. It would have been much more interesting–and made a MUCH different ending–than the way things actually turned out.

Overall, this was a quick and entertaining read…but not one of my top favorites from this year so far. The characters felt a bit stiff, I couldn’t really invest myself in the story because I felt like I didn’t KNOW the characters well–even Hunter was a bit of a vague mystery for me. And while the prose was filled with action and snark, in the end, this book disappointed me a bit. Still, I’d recommend to readers of urban fantasy, bounty hunters, and the paranormal. This was a fun book to lose myself in for a few hours; I’ll be keeping an eye out for future works from Sarai Henderson, for sure!