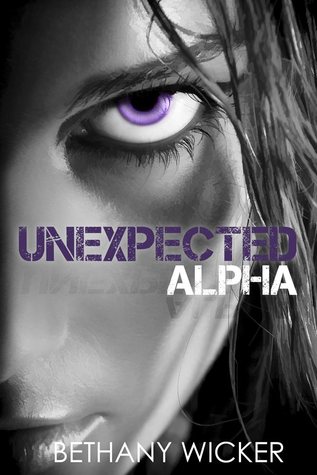 Female Alphas are unheard of in werewolf society, and the Sapphire Pack is no different. So when Lena’s father dies, no one is more shocked than she to discover that his Alpha powers have transferred to her. Lena has her hands full protecting her pack from hunters and rogue wolves, while simultaneously facing prejudices and power-hungry males who want to mate with her just to steal her title.

But when the uber-sexy Kane enters the picture, Lena gets a lot more than she bargained for. He irritates her to no end, while giving her butterflies at the same time. With his interference and her new-found power bubbling under her skin, something inside her changes, leaving her confused as to what she truly is. She soon discovers that searching for answers is most difficult when the last person she can trust is the only one who has them.

When I read the blurb for this book, I was SO excited. For one, though I know they exist, I’ve never read a book about werewolves (er…well, I mean, SOLELY about werewolves. Because you know, they’re kind of everywhere. You can’t escape them!) I was expecting a lot of drama, a fair amount of action, and a kick ass female lead.

I don’t feel like I really got any of that.

First off: the writing was awkward. The tense kept shifting between “past” and “future” in the middle of sentences, descriptors were really lacking… I just couldn’t “see” into this story. And I think, if I’m honest, that’s the biggest problem I had. Well, that, and the world-building, but I’ll get to that in a minute. See… I’m a very tactile reader. I like my descriptors to sing. I like the world to sweep across my thoughts like a dream and root me, deeply, there until the end. This read just…didn’t.

The world-building, also, is severely lacking. By the time I reached the end, I didn’t feel as if any of my questions had been answered. In fact, I had about fifty more questions crop up the last few chapters than I should have, because things kept being added in instead of getting wrapped up. Imagine you’re sitting in your class, taking a final exam. Except the teacher put things on the test that you never covered in your lectures, never brushed upon in your readings, never learned from your assignments. That’s sort of how it feels the world-building in this read was patched together; we were given little bits and glimpses, but in the end, none of them quite matched up. It’s like trying to put a puzzle together with pieces from ten OTHER puzzles that don’t fit.

While our female lead IS pretty kick ass, she sort of falls flat with the perspective this was given. The first few chapters are filled with info-dumps, stereotypes, and general “too much going on, not enough building up.” There is so much packed into this read (seriously, it’s like your carry-on bag after a three day vacation where lots of books were bought!) I don’t feel any of it was given the chance to actually breathe and grow. Which is sad, because this story has the potential to be awesome! I can see it there… but it’s bogged down with awkward tense shifts, info dumps, and general “ick.”

This definitely wasn’t the read for me, unfortunately. As excited as I was going in, I lost that the farther I went. I can’t personally say I’d recommend this read, but if you’re into “alternative” werewolf novels, this might be for you. For me, it’s on to the next one!