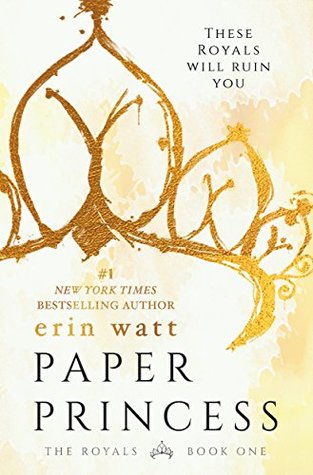 From strip clubs and truck stops to southern coast mansions and prep schools, one girl tries to stay true to herself.

These Royals will ruin you…

Ella Harper is a survivor—a pragmatic optimist. She’s spent her whole life moving from town to town with her flighty mother, struggling to make ends meet and believing that someday she’ll climb out of the gutter. After her mother’s death, Ella is truly alone.

Until Callum Royal appears, plucking Ella out of poverty and tossing her into his posh mansion among his five sons who all hate her. Each Royal boy is more magnetic than the last, but none as captivating as Reed Royal, the boy who is determined to send her back to the slums she came from.

Reed doesn’t want her. He says she doesn’t belong with the Royals.

Wealth. Excess. Deception. It’s like nothing Ella has ever experienced, and if she’s going to survive her time in the Royal palace, she’ll need to learn to issue her own Royal decrees.

Quick Reasons: WOW these boys are spoiled; actually most of the characters in this book start out that way; REED, REED WHAT THE HELL DID YOU EVEN?!?!?!; THAT EEEEEENDING!; seriously, listening to this on audiobook was SUPER STEAMY

HEY LOOK, it’s a book I read just for the fun of it and not for any specific review requirement or obligation! (Because apparently July is the month for me to sit back a bit and pick up the slack on my HUMONGOUS BACKLOG of books I buy on whims and then never actually read…)

And let me just say, listening to this on audiobook? BEST. IDEA. EVER. The narrator (hats off to Angela Goethals!) brought SO MUCH to this read that I don’t think I’d have caught otherwise. I was enthralled from the very first. Her characterizations leapt out of the speakers, I could imagine everything that was happening…and a few of the more subtle nuances (character voices, for instance, or specific reactions) were more fully captured and “shown.” AND THE STEAMEH SCENES! Oh, my penguins, those scenes–I cannot even begin to explain how much hotter they became in the midst of hearing, instead of seeing, the words. There’s something…more realistic? more believable? about steamy scenes being read aloud than I sometimes feel just reading the words, and Angela Goethals did a brilliant job bringing those scenes to life.

I was taken aback a little by how spoiled these characters seem. Don’t get me wrong–I understand they were born with the world at their feet and all, but some of them REALLY seem far fetched in their…reactions to? interactions with?…the rest of the world. These boys, especially, go to so many lengths to torture and torment Ella, and for what exactly? A small taste of fun? A tiny bit of vengeance? I for sure wasn’t expecting to find such loathsome boys on the other side of these pages–though they do, in the end, make up for a lot of their beginnings, so I guess character growth wins out again? (BUT THAT ENDING….AND REED…. WHY, BOOK, WHYYYYY?!)

I had a TON of fun listening to this via audiobook–Angela Goethals really brought her A-game to the table and brought these characters, and this story, to life for me. And the steamy scenes–SO much steamier while listening to them being read, than they are while reading them yourself! I’d recommend this to lovers of romance, erotica (I mean this sort of is?), and surprising (but entertaining!) reads. Welcome to the Royal family, Penguins; will you sink, or learn to swim?

2 thoughts on “Paper Princess: Wow, These Royals are SPOILED”