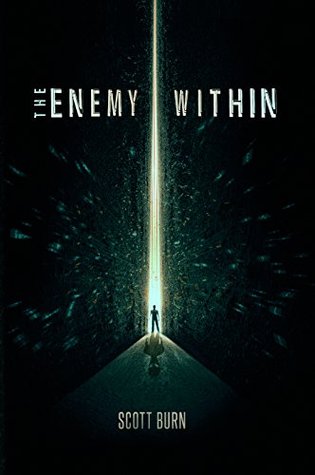 Seventeen-year-old Max has always felt like an outsider. When the agonizing apocalyptic visions begin, he decides suicide is his only escape. He soon finds himself in an institution under the guidance of a therapist who sees something exceptional in him. Just as he begins to leave the hallucinations behind, Max discovers the visions weren’t just in his head.

There are three others who have shared those same thoughts and they’ve been searching for Max. Like him, they are something more than human. Each of them possesses certain abilities, which they’re going to need when a covert military group begins hunting them down.

As the danger escalates, Max doesn’t know which side to trust. But in the end, his choice will decide the fate of both species.

Quick Reasons: slightly confusing premise; I felt some important information was just sort of tossed at us at weird times; interesting, complex characters; the ending felt a bit forced/cliche; I wish this had felt more “alien” than it did

Huge thanks to Scott Burns for sending me a free digital galley of this title in exchange for a (voluntary!) honest review! This in no way altered my read of or opinions on this book.

This book was SUPER interesting, Penguins! I was sucked into the story almost immediately, and taken on such a wild journey I don’t quite know where to begin. The characters are well-rounded; their personalities practically leap off the pages and into reality. I felt as if I were, for brief moments, part of the gang–I felt their struggles, I empathized (maybe a little too much for a few). I also really enjoyed that we’re given brief glimpses into the most important players. Each voice is distinctly crafted and easy to tell apart, and each shift brought something new and unexpected.

I did, several times, find myself wishing this felt MORE alien. While it becomes apparent early on that the main group are not “human”….I found myself forgetting this fact several times. So far as I can tell, they look human and for the most part act human and have very limited “powers,” which made reading this–especially during those quiet moments of the story–feel a bit more normal and every day than I felt it should. In fact, there weren’t many moments that the main group felt actually alien; throughout this entire read, their reactions to and interactions with the world were weighted more toward “human” than “not,” which sort of disappointed me.

I did, however, like the way the battle between the sides was written. While I really loathed many of the (actual) humans in the military group chasing these kids, I also found myself being suspicious of and eventually loathing a few of the other characters as well. This balancing act between “good” and “evil”–and the ways each side portrayed themselves as the victims–really validated this journey and helped make it more realistic for me. The fact that each side also has personalities with…questionable morals is the right term, I suppose…only helped to more fully immerse me in the read (and the characters’ mindsets).

This was a super intriguing and thought-provoking read, though I do wish it had felt just a bit more “alien” and a bit less “another day in the human world.” The characters are complex and interesting, and there were a couple “laugh out loud” snark moments that I really enjoyed. I’d recommend this to lovers of science fiction, “alien” versus “human,” and fast-paced reads. The Eye is watching, Penguins; which side are you on?