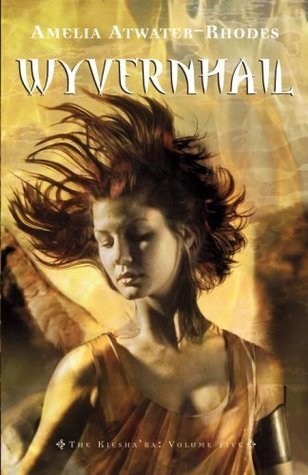 HAI HAS ALWAYS been an outsider. With a falcon mother and a deceased cobra father, she is considered a mongrel by most, an ally by some, and a friend by few. Hai’s broken falcon wings are a painful reminder of the life she once led on the island of Ahnmik. And here in Wyvern’s Court, the avian and serpiente royal family keep their distance, refusing to acknowledge her cobra bloodline. They know that Hai’s magic is so volatile, she can barely control it, and images of the past and future threaten to overwhelm her.

When Hai’s cousin, Oliza Shardae Cobriana, abdicates the throne of Wyvern’s Court, Hai has visions only of destruction: the serpiente king Salem, dying in her arms; the dutiful guard, Nicias, unable to save a generation of children; and Wyvern’s Court engulfed in flames.

Now Hai will do anything to protect her new home – even if it means betraying the very people who need her most.

Quick Reasons: I LOVE that this comes full-circle at the end; this was a great way to end the series; important moral/societal statements explored; stubborn characters who give up everything for what’s right; awesome continued world-building

I just… Oh my penguins, guys! This book–this series–I just can’t put into words how much I adore Amelia Atwater-Rhodes; her fantasy worlds have a way of sucking me in and holding me hostage, of forcing me to step outside of myself, of taking me on a wild and unexpected journey.

And somehow, she always manages to sneak in an important moral/societal statement. For this series specifically, the largest focus was upon prejudice–and the many ways it touches, weaves into, and alters everything we do. Amelia Atwater-Rhodes works these themes in so seamlessly and subtly, you won’t realize they’re there until you turn the last page and think back on what you’ve just read. The statements are no less important, though–and are handled with a sensitivity and grace I can’t help but feel awed by.

The characters for this book, specifically, are single-minded (even when they’re NOT–trust me, there’s a reason I say it like this, I just can’t explain because spoilers) and willing to do whatever it takes to make things right. But sometimes, as portrayed in the journey of our MC, there aren’t any “easy” answers. The rest of the characters are just as fierce, as compelled by their emotions and beliefs–just as well-rounded and complex.

The plot for this book took me on an unexpected, wild journey. Of course, this should come as no surprise–Amelia Atwater-Rhodes is, in my personal opinion, the QUEEN of crafting an intriguing, believable fantasy world. She managed to bring this series almost full-circle…and span several generations and decades in the process! The continued world-building throughout this series is one of the biggest reasons these books get such high ratings for me; there is always something new to learn about the world, something different to think about. The fact that the characters are such endearing, complex, individualized beings only furthers my belief that this writer is top-notch.

I had a ton of fun finishing out this series, and cannot WAIT to dive into my next Amelia Atwater-Rhodes read–she never disappoints! The journey was wild, entertaining, and full of surprises–and the characters remain some of my top favorites. I definitely recommend this to lovers of fantasy, political intrigue, and uniquely individual characters. Take a leap, penguins, and step into Wyvern’s Court; you’re bound to like it here!

One thought on “Wyvernhail: Now, THAT’S What I Call a Series Finale!”