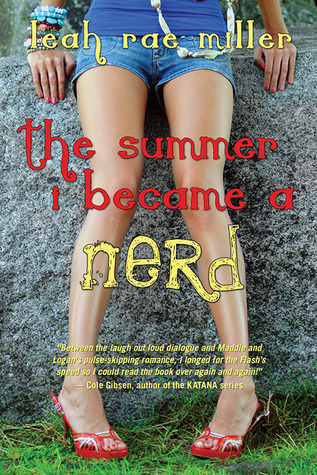 On the outside, seventeen-year-old Madelyne Summers looks like your typical blond cheerleader—perky, popular, and dating the star quarterback. But inside, Maddie spends more time agonizing over what will happen in the next issue of her favorite comic book than planning pep rallies with her squad. That she’s a nerd hiding in a popular girl’s body isn’t just unknown, it’s anti-known. And she needs to keep it that way.

Summer is the only time Maddie lets her real self out to play, but when she slips up and the adorkable guy behind the local comic shop’s counter uncovers her secret, she’s busted. Before she can shake a pom-pom, Maddie’s whisked into Logan’s world of comic conventions, live-action role-playing, and first-person-shooter video games. And she loves it. But the more she denies who she really is, the deeper her lies become…and the more she risks losing Logan forever.

Quick Reasons: just exactly the cutesy contemporary I needed today; I’m all moosh and goosh after reading; these characters are the definition of adorbs; the nerdy pop culture references rock my toe socks; I squealed, I raged, I wanted to shake some sense into Maddie, I squealed some more; seriously, this book is adorable

I know what you’re thinking. “Beth! You’ve been on an ARC and review request reading spree! What happened?!” Well, I’ll tell you… I decided, spur of the moment (as I do!) to take a mini break today and bust out some of my cutesy contemporaries, because I’ve been missing those butterflies something crazy lately. Also, because I can–because I’m an adult and the ruler of my own schedule and the maker of my own decisions. SO THERE!

Seriously, though, guys–I don’t regret this decision at all. I bought this book and its companion novel a long while back–like, in the summer time? before the summer time?!–and haven’t had the chance to pick them up, which is a TRAVESTY, because this book? Super adorable, super squishy, and super awesome at the mooshy goosh mashing of my heart. No, that’s not a real phrase; no, I don’t care that it’s not a real phrase.

I’ll admit it: on several occasions, I raged at Maddie’s lack of sense. I wondered how, and WHY, anyone would ever feel the need to hide such an important, integral part of themselves–especially something so minuscule in the grand scheme of things. I get it–people can be cruel. But seriously, I think at times she took trying to keep her real self hidden to the EXTREME, and hurt people unnecessarily because of it. However: Logan? Totally made this entire novel for me. He is just so adorably nerdy, I couldn’t help but fall in love with him right away. And the snark factor! I mean, these characters know how to throw zingers–I couldn’t help but giggle aloud through most of this read!

There are some important subjects explored here, as well–the biggest of which is, it shouldn’t surprise you to learn, being true to yourself. I had a ton of fun following Maddie on her journey to self-love and self-acceptance, and really appreciate the sensitive, awesome way that Leah Rae Miller handled this. There was very little girl-hate or girl-bashing; every character is respected and redeemable. There is SO MUCH done right in this book, penguins, and I bow down to the author for this.

This was cutesy contemporary at its finest. My little penguin heart is a pile of goosh and melted ice, and I’m not regretting that at all. These characters are well-rounded and go through so much great growth; Maddie, especially, comes out on top for me, though Logan is a dreamy little nerd as well. The pop culture references and the serious level of snark are also fantastic. I definitely recommend to lovers of high school romances, self-love journeys, and characters too adorable for their own good. Pick this up, penguins–and let the moosh butterflies fly.

One thought on “The Summer I Became a Nerd: Nerd-Culture References?! YES PLEASE!”