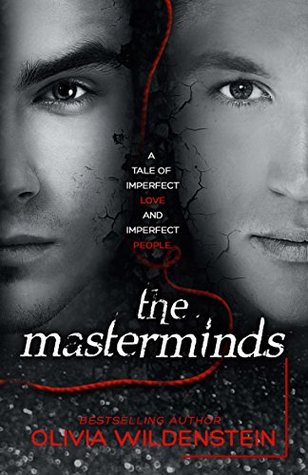 From prisons and reality TV to mansions and safe houses, THE MASTERMINDS revisits THE MASTERPIECERS and closes the twins’ story. It is a tale of imperfect love and imperfect people.

The only downside to Joshua Cooper’s investigation of a mob runner is not being able to discuss it with his two best friends, nineteen-year-old twins, Aster and Ivy Redd. However, when Ivy sells one of her quilts to the mob runner, and Aster hits him with her car in a motel parking lot, they become entangled in his investigation. The FBI even believes the twins could knowingly be involved with the mob. Joshua will do everything he can to disprove their suspicion and nail the true criminal.

Brook Jackson is a judge on the Masterpiecers’s art competition. That is his official job; his unofficial job is running questionable errands against easy cash. But a ripped quilt and the girl who sewed it will make Brook’s life and heart spiral out of control.

Accused of money laundering, Brook becomes the fall guy. After three weeks of imprisonment, he cuts a deal with Joshua: his freedom for the real felons and a meeting with Ivy. Although eager to clear his name, Brook wants to win Ivy’s forgiveness—and if she’s willing to give it to him—her love.

Olivia Wildenstein grew up in New York City, the daughter of a French
father with a great sense of humor, and a Swedish mother whom she speaks to at least three times a
day. She chose Brown University to complete her undergraduate studies and earned a bachelor’s in
comparative literature. After designing jewelry for a few years, Wildenstein traded in her tools for a
laptop computer and a very comfortable chair. This line of work made more sense, considering her
college degree.
When she’s not writing, she’s psychoanalyzing
everyone she meets (Yes. Everyone), eavesdropping on conversations to gather material for her next
book, baking up a storm (that she actually eats), going to the gym (because she eats), and attempting
not to be late at her children’s school (like she is 4 out of 5 mornings, on good
weeks).
Wildenstein lives with her husband and three
children in Geneva, Switzerland, where she’s an active member of the writing
community.
Author Links:

Quick Reasons: I just couldn’t get into this one; these characters felt a bit stiff; the action/adventure fell a bit flat; I appreciated seeing these characters from different perspectives; this took the original story and flipped it to show the OTHER side; the epilogue with Ivy’s POV was awesome

HUGE thanks to Olivia Wildenstein for sending me a copy of this title in exchange for an honest review! This in no way altered my read of or opinions on this book.

It’s safe to say I didn’t enjoy this companion novel nearly as much as I enjoyed the original. There’s nothing inherently wrong with this book–I really appreciated that we were given the opportunity to step out of Ivy and Aster’s minds and INTO the other side of the story. I LOVE that we were given the chance to see what was happening in Josh and Brook’s lives while Ivy and Aster were struggling to stay alive. But… there was something I found lacking about this read.

I think it comes down to the characters, in the end. While I appreciate being granted an insight into these two minds, I didn’t feel nearly as connected to them as a reader. I felt like a lot of their interactions/reactions in this book were forced to fit the story line, instead of being allowed to flow naturally. They came off a bit like cardboard cutouts, to me personally–I just couldn’t FEEL them, or believe them, as characters in this story.

The action/adventure also fell a bit flat for me, as these two characters weren’t nearly as involved or as in danger as Ivy and Aster in the first book. It felt like these two were always the ones running to SAVE the girls instead of facing their own struggles and danger. Even Josh’s relationship took a backseat; instead of being part of the story that could connect me to him better, he spent the majority of the book running away from/standing up his girlfriend. And I understand why–his job, and the girls, came first–but that was a HUGE part of the story that could have helped cement him as a realistic character in my mind, that seemed to be overlooked.

In the end, this companion novel just wasn’t for me I guess. It wasn’t bad, necessarily–I just feel like I got all I really needed to from the original novel. Save the last few chapters, which weren’t included in the original story, I don’t feel I walked away from this read with any new information. I’d still recommend this to lovers of crime novels, action/adventure scenes, and flawed but redeemable characters. And of course, I can’t wait to see what Olivia Wildenstein does next!

One thought on “Book Blitz and Review: The Masterminds”