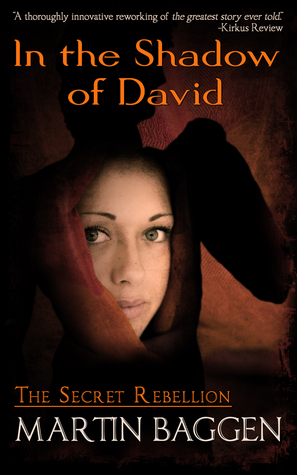 In the Shadow of David: The Secret Rebellion is the story of a small band of revolutionaries and how they nearly toppled the world’s mightiest empire without a fight, and their failed conspiracy giving birth to the world’s largest religion.

Miriam (traditional for Mary) is a descendant of the last rulers of a free Jewish homeland. In 30AD, the young would-be princess ends her secret exile in Egypt to begin her quest of vanquishing the brutal occupation of Roman supremacy.

The story unfolds with her among a small group following the word of a strange preacher, who has also returned from a self-imposed exile. Yohannon (John the Baptist) sees the world in a radically different way than any other religious leaders. That is less important to Miriam than the fact that he is a descendant of King David himself.

When Miriam’s scheme to fake the death and resurrection of the reluctant evangelizer ends in his capture and ultimate execution, a new messianic figure is needed. Yeshua (Jesus), the estranged cousin of Yohannon, is that man.

Within days of a contentious reunion, and the arrest of his elder kin, Yeshua is swept up in Miriam’s vision for a united and free Jewish nation.

Backed by an underground network of wealthy Jewish businessmen, a clandestine ministry is launched to roam the countryside, spreading a gospel of inclusion, faith, and a new destiny for the oppressed. Yeshua and Miriam believe the greatest strength they can call upon is the collective faith of their fellow countrymen. A fragmented Jewish people must be unified.

For twelve demanding months the ministry walks, escaping Roman detection, to nearly every town and village of Judea, Perea, Sumaria, Galilee, and Decapolis. Yeshua blossoms into his role as Messiah, captivating crowds large and small with his gift of oratory and soaring spiritual rhetoric. To cement his larger-than-life persona, the group routinely devises staged “miraculous” events. Restoring sight to the blind, and strength to the lame.

It is not long before the two principals of the movement are husband and wife, with a child on the way.

The ministry culminates with their much-anticipated visit during Passover, to the crown jewel of Jewish civilization, Jerusalem. The unveiling of the Messiah and the attempted reclamation of the Holy City is to take place during the most misunderstood hours of recorded history.

What follows are a series of events that have defined the faith of billions for two thousand years. Yeshua is rescued from crucifixion in a daring act of cunning and bravery lead by his stalwart companion, Yehuda (Judas).

In the Shadow of David: The Secret Rebellion is the juxtaposition of political-thriller in Biblical times. It sets today’s perceptions of campaigns, manipulation, and money, atop the ancient world of the New Testament and personalities we thought we knew.

Quick Reasons: interesting, diverse setting; challenging, complex plot/ideas; historical, though perhaps not entirely “accurate”; perhaps not the book for everybody; intriguing, though at times confusing, story; MANY different perspectives

First and foremost, huge thanks to Martin Baggen and Netgalley for sending me a copy of this title in exchange for an honest review! This in no way altered my read of or opinions on this book.

Let me just say, I am not, by any means, a religious person. I was not brought up to be religious…and that made reading this a bit difficult, mostly because I did not have the past reading to compare and contrast it to. Therefore, I went into this book viewing it as any other book–and may have, in the end, missed out on some key elements and/or important plot points.

This WAS, overall, a bit confusing. There are a ton of perspectives coming into play, and it was hard at times to keep track of whose thoughts we were following. Also, because of aforementioned lack of comparison, I also don’t feel I picked up on all the plot cues and points that I maybe COULD have–which means, unfortunately, I personally did not take much away from this read.

Martin Baggen, however, made the story interesting and enthralling enough that I was compelled to keep reading. The “twist” on the subject was both challenging and unique, mixing religion with politics–yet keeping it easy to follow and understand. So, while this book wasn’t necessarily “up my alley” in terms of subject matter, I was intrigued enough regardless to keep reading and find out what happened next.

Overall, this was an interesting, entertaining take on the coming of the Messiah–and the political movement that spawned it (at least, in this “twist” on the story). While not necessarily my favorite type of read, I still enjoyed seeing where the journey led and learning what happened next. I definitely recommend to lovers of historical fiction, political thrillers with a focus on religion, and books that put new twists on the stories we all think we know!

2 thoughts on “In the Shadow of David: An Interesting Twist on the Messiah”