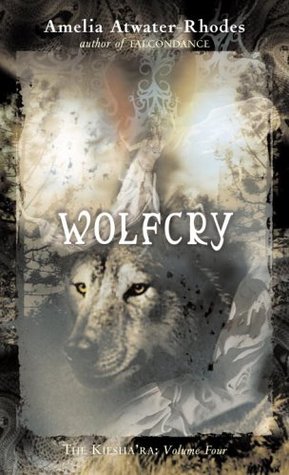 Oliza Shardae Cobriana is heir to Wyvern’s Court, home of the avians and serpiente, whose war with each other ended just before Oliza was born. But hatred is slow to die, and not everyone likes the expressive way in which Urban, a serpiente dancer, is courting Oliza–especially not Marus, her reserved avian suitor. And when Urban is found beaten in avian land, Oliza is filled with despair. How can she be expected to lead a unified society if her people still cannot live peacefully together?

Before Oliza can try to mend the rift in Wyvern’s Court, she is kidnapped by mercenaries, who take her deep into wolves’ territory. As Wyvern princess, all Oliza has ever wanted is to see a future where she can find love and take a mate without inciting another war. The time is now. She owes it to her people–and to herself.

Quick Reasons: not much focus on romance, though there sort of is one; there’s a lot of mystery and intrigue, with a plot twist I didn’t see coming; lots of focus on the political and societal implications of the world/the current struggle to unite two contrasting peoples; an intriguing glimpse into the magic of the world

“You don’t have to speak. Words fade,” she whispered. “I know that better than anyone. Words are forgotten; they are regretted. Unnecessary.”

I just cannot, CANNOT, explain how much I love the worlds Amelia Atwater-Rhodes has created in her novels. I returned, again, to this series—now almost complete—when I realized this afternoon that I needed something quick, something fantasy, and something powerful. Because Amelia Atwater-Rhodes has always had the upper-hand in my bookish world when it comes to powerful, thought-provoking reads, I settled upon this one. I am not disappointed.

Unlike the last two books in this series, this one took an unexpected, though not unwelcome, turn—and didn’t focus on the romance, but instead upon the world. The political and societal drama, the struggles and heartache that come with trying—and flailing to figure out how—to mold two different and opposing peoples into one cohesive clan… Unlike the last two books in the series, this one tackled the world head-on, and left no survivors in the end.

“I am of you, of all of you, avian and serpiente. I have for all my life wondered how, beyond my very existence, I can prove to you that we can live together. In my parents’ time, the mission was to stop the bloodshed, but in mind, my goal has always been to stop the hatred.

“And I have never known how.”

As always, the characters were intriguing and stubbornly wonderful. I love how much power Amelia Atwater-Rhodes always gives her female leads; they don’t NEED men to make them whole, to make them strong. And often, they discover in their journies that men at their sides lead to more drama. I really connected with Oliza in this particular read; despite the world falling apart around her, despite the challenges she faces, I feel she reaches a mature and sound decision in the end.

I was a bit disappointed in the romance itself, if I’m being honest. I went in to this expecting fireworks and swoony love and all the wonderful delicious heart-murmurs the rest of the series has, so far, given me. But this book… the focus isn’t on the romance, which made it fall a bit flat overall. It made it seem a bit half-hearted, like Amelia Atwater-Rhodes decided to include it only at the end of the journey, as an afterthought almost. I didn’t much like that—given how little we see the lovers interact, due to the past and troubles of one of them, I’m not sure I can convince myself the reality of their “love.” It just seemed a bit too wrapped up and simplified, I guess.

“We have tried to marry two worlds, but one cannot perform a marriage while both parties hold knives to each other’s throats. One cannot sew two pieces of cloth together while both unravel.”

Overall, though, I enjoyed this installment. The characters were entertaining, snarky where needed, and stood up for themselves even in the most desperate moments. The world is, while not “realistic” in the sense of “I could see it happening tomorrow,” realistic in that it tackles some societal struggles our own world is still unable to derail. I definitely recommend to lovers of shifters, fantasy, and novels with nods to political drama. This was a great book to wrap up March with! I can’t wait to see what April has in store.

2 thoughts on “A Reiew of Wolfcry (The Kiesha’ra: Volume 4), by Amelia Atwater-Rhodes”