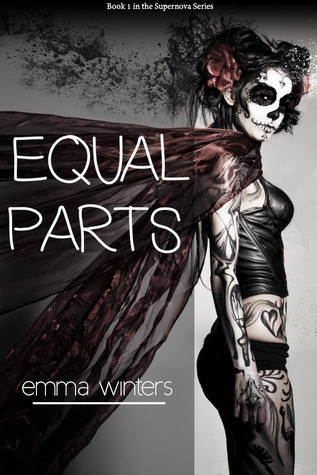 Nobody knows happiness better than nineteen-year-old Felicity Eastwood. For years now, she’s been ‘gifted’ with the ability to collect and transfer happiness to anyone at will. Well, everyone except herself.
That is until Achilles – renowned criminal mastermind with a face painted like Death and enough charm to cause hormonal riots – crashes into Felicity’s world and makes her feel … something.

Determined not to let such a coveted superpower slip beyond his reach, Achilles kidnaps Felicity, hoping to use her ability to brave his own skeletons. Felicity is only a half-unwilling prisoner though, forgoing escape to learn more of the man behind the mask and pursue the inexplicable spark between them.

As the lines between hero and villain begin to blur, Felicity finds herself wondering if Achilles might be the key to her own happiness at long last. Is it possible to be so happy with someone so dangerous?

But Achilles isn’t the only villain in the town, and the pursuit of happiness can be a deadly hunt…

Quick Reasons: holy hot penguins, guys!; this romance is steamy and dangerous and my type of perfect; I have a thing for men who call their women “darling” and this book satisfied that; drama, angst, and turmoil—oh my!; the world-building is inventive and intriguing; the characters leap off the page; I NEED BOOK TWO

I think I made a HUGE mistake, guys.

But this man was different. He carried sinister. It was woven into the fine threads of his expensive-looking suit; it bled from his manicured fingers and perfectly groomed facial features. He had that familiar, eerie glow to him – the superhuman glow.

Actually, I think I made several huge mistakes. The first? Deciding to pick this book up. It was published in 2012. Book two doesn’t even EXIST on Goodreads yet. But for some reason, I thought if I read it and liked it, I wouldn’t be a sobbing, broken mess when I got to the end and couldn’t pick the next one up immediately? Foolish of me. I’ve been ALL ABOUT the feels books this month, and this book is ALL ABOUT the feels.

My second mistake? I fell in love with the villain. I mean, granted, this book is also all about breaking the boundaries and making readers think outside the box. This book reminds us, time and time and time again, to never—EVER—leap to snap judgments, or come to conclusions about things we don’t know. This book forced me to reconsider everything I thought I believed about the “bad” guys…while making me fall head-over-ass for the one character I normally wouldn’t.

“You are…” If I didn’t know any better, I’d think he was holding his breath. “Hiding.”

I think I surprised him, because the frown from the mayor comment lifted. “Hiding?”

“Everyone’s hiding. Everyone has a skeleton in their closet. But people don’t like it when the skeleton is on display – pun intended.” I arched a pointed brow at his mask. “You’re hiding the most important feature in this world – your face, and it freaks the hell out of people. People don’t understand you, and for that, they fear you. Therefore, you’re a villain.”

I have to admit, when I started this read, I wasn’t expecting much from it. But from the get-go, the very first word, I knew this book was determined to prove itself to me. The characters are vibrant and leap to life without much help; I LOVE the stubborn determination they hold onto throughout. I love the way Achilles’ and Felicity’s relationship rose and fell like the tide—from quasi-enemies, to almost lovers, to heartbroken and apart….to giving up everything just to be near each other. The entire dance is realistic, human, and endearing…and seeing Achilles shape and grow throughout, watching Flick react and grow herself… I just… GAH, these characters are under my skin now!

The plot is ALSO gorgeously done. Action-packed, laden with drama and angst, and never-stopping—the story sweeps you up from page one and refuses to let go until the very end, and even then, you’re left begging for more. Which explains why, having just finished the read, I’m now raging at myself for picking it up when book two doesn’t even have a title. Foolish, Beth! You should know better. And yet…I can’t be mad at myself, because this book is SO SO GOOD!

I mean, don’t get me wrong–there ARE some flaws with it, mostly due to weird spelling errors or missing words in the middle of sentences. The prose is gorgeous–atmospheric and descriptive–but a few times I found myself hung up on awkward phrasing or missing words, which had me backtracking to figure out just what was being said. These were so slight, though, I can overlook them in light of the fact that this book has ALL the feels.

He slid into the bed beside me, flicking off the lamp as he went. I vaguely noted that he hadn’t washed the paint or blood off his face. I suppose, with black sheets, it didn’t matter that much.

I should have been aware of his body’s proximity to mine, of the heat radiating from his skin just inches from me, of the fact that I was sharing a bed with a madman of epic proportions.

But awareness was beyond me, and I guess that, in the dark, all cats are gray.

This is one book you’re going to want to step out of your comfort zone for, guys. Trust me—NOTHING is as it seems in this read. The characters are lovable, redeemable (mostly), and delicious. The sense of mystery and intrigue seeps from every page; you’ll find yourself rage-reading in the dramatic moments, holding your breath for an outcome you didn’t realize until that moment you even wanted… Gah, this book! I definitely recommend to lovers of urban fantasy, steamy romances, and villains with hidden agendas…and undiscovered soft sides. Pick this book up; you won’t regret it! (And maybe that’ll help convince the author to publish book two, already!)

7 thoughts on “A Review of Equal Parts (Supernova #1), by Emma Winters”