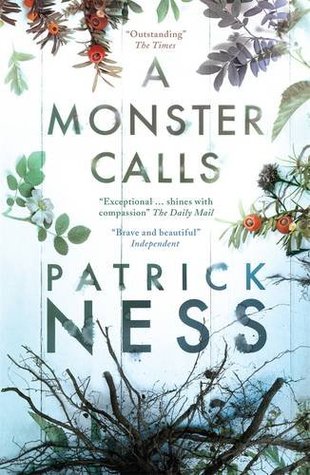 The monster showed up after midnight. As they do.

But it isn’t the monster Conor’s been expecting. He’s been expecting the one from his nightmare, the one he’s had nearly every night since his mother started her treatments, the one with the darkness and the wind and the screaming…

This monster is something different, though. Something ancient, something wild. And it wants the most dangerous thing of all from Conor.

It wants the truth.

Quick Reasons: oh PENGUINS, this book hurt!; I understand why so many people cry while reading, I almost did myself; beautiful prose; lots of nods to oral narratives/origin stories; the voices are clear and haunting; the “reveal” at the end wasn’t quite what I was expecting; this book broke me so hard

I just… I can’t even wrap my brain around how much this book HURT to read. I have never in my life read a mid-grade novel that broke me into so many tiny pieces. I completely understand now why so many people claim to have cried during this read; several times, I found my own eyes watering! Quite the feat, if I’m being honest–I don’t often cry during books.

The characters throughout are human, believable, and heart-wrenching. Conor, in particular, touched me deeply–his iron-will, his strength in the face of looming tragedy, the stubbornness to “keep it together” even when his world starts falling apart. There are SO many morals layered throughout this read, that teach readers what it means to be human in the face of grief, that let readers know–through the characters, through Conor, through the Monster–just how okay it is to NOT be okay all the time. I just… I can’t even explain the many ways this read touched me; I have a feeling this book will haunt me for years.

You were merely wishing for the end of pain, the monster said. Your own pain. An end to how it isolated you. It is the most human wish of all.

You did, the monster said, but you also did not.

Conor sniffed and looked up to its face, which was as big as a wall in front of him. “How can both be true?”

Because humans are complicated beasts, the monster said. How can a queen be both a good witch and a bad witch? How can a prince be a murderer and a saviour? How can an apothecary be evil-tempered but right-thinking? How can a parson be wrong-thinking but good-hearted? How can invisible men make themselves more lonely by being seen?

I do warn potential future readers: this mid-grade book is DARK. There is no real “happy ending” here. This book mimics real life, and the way the world can sometimes go off-kilter; the way life can sometimes let us down. This book will make you stop, eyes filled with tears, and really THINK about the ways you, yourself, cope–and how maybe, just maybe, those things you did in trying times were what was needed all along. This book will make you THINK…but I don’t recommend reading it if that’s not something you’re open to.

This book swept into my life like a hurricane this week…and I adored, and yet somehow despised…every moment of it. I definitely recommend to lovers of oral narratives, abstract stories with killer morals, and life-ruining reads. This is one mid-grade I think everybody should read–there’s just too much to learn from it to pass it by!

23 thoughts on “A Review of A Monster Calls, by Patrick Ness”