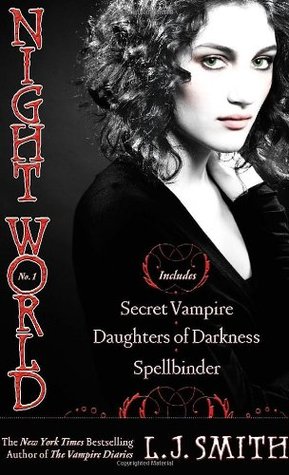 In Secret Vampire, Poppy thought the summer would last forever. Then she was diagnosed with terminal cancer. Now Poppy’s only hope for survival is James, her friend and secret love. A vampire in the Night World, James can make Poppy immortal. But first they both must risk everything to go against the laws of Night World.

Reading this was a bit like forcing yourself to watch a movie you’re not really interested in, but not NOT interested in at the same time. Does that make sense? Regardless, it’s how I feel.

The romance between James and Poppy was sweet…if not a bit on the “obsessive first-love” side of the line. I mean honestly, Poppy even says herself near the end—she’s only ever wanted James. Which…eh. That’s just not the way things work in real life.

She had never been so close to anybody. It was as if they were one being, together, not predator and prey, but partners in a dance.

The characters are sort of flat and one-dimensional. There’s not much “growth” happening, save in Phillip’s case. Which was disappointing for me, seeing as Poppy and James are the main two of this story. The action, while pretty fast-paced, felt a bit like throwing puzzle pieces into place near the end of completion: a lot of it was stiff and awkward, and it all seemed to wrap up MUCH too nicely at the end to get bonus points for taking me on a wild journey.

Also, nothing new added to vampire lore. I remember reading these books when I was younger and enjoying them…what happened? Regardless, it was entertaining, and there were some good snark moments.

Fugitives from Night World, three vampire sisters leave their isolated home to live among humans in Daughters of Darkness. Their brother, Ash, is sent to bring the girls back, but he falls in love with their beautiful friend.

Rating: 3.75/5 Penguins
Quick Reasons: much more interesting, well-rounded characters; the action scenes didn’t feel as rushed or off-the-cuff; the romance was just the sort I LOVE (hate to grudging respect to friendship to maybe possibly might be love); an introduction to this world’s werewoves

This story was MUCH more entertaining than the first one. The characters are snarky, quirky, and well-rounded; I fell in love with them all pretty much immediately, even the “villain.” There’s a TON of growth happening in this read, particularly for our main pair, Ash and Mary-Lynnette.

“Do I look like the kind of person who wastes time turning goats into pin cushions?”

The snark, in particular, was fierce for this story. And I ADORED every moment of it! There were a few times I was tempted to LOL…though I managed to hold back. The husband looks at me funny when I give in, after all. But really, the writing was much better–less awkward, more smooth and seamless. The humor was well-done and quick to lighten the mood. The romance was also much more believable–it wasn’t love at first sight. It wasn’t even LIKE at first sight. I rather adore those relationships that start at “loathe and hate” and work their way to “respect and maybe, might be, SOMEDAY, love”–they’re my favorite.

I liked this one much better than the first story. Still nothing “new” on vampire lore, but the enjoyment was real!

Two witch cousins fight over their high school crush. It’s a battle between black magic and white magic in Spellbinder.

Okay. So the middle story in this collection was my favorite of the three. This one wasn’t bad, per se–the characters are well-rendered and realistic, though Blaise had a HUGE flair for the dramatics.

The characters fell a bit flat overall, though, much like those in the first story. Instead of leaping off the page, they just sort of seemed to float there–disconnected spirits, almost. Blaise, of course, had enough personality that she was easy to imagine in my head. The rest of them, though… Well, they just seemed a bit one-dimensional again.

The worms were beautifully drawn, with their nervous systems and reproductive organs shaded in different colors of highlighter, but the artist had also given them big goofy smiling faces. Grotesque but lovable in a cross-eyed way.

I did enjoy the switch from vampires to witches; there was some new lore mixed in with the old that made this story fascinating. There was a ton of magic and the paranormal, which kept my interest as well. The action was a bit flat, though, throughout–there was no real sense of “buildup” for me. Things just sort of chugged along, without pulling in my feelings.

Overall, these were all interesting and entertaining reads, though not my favorite; the characters fell a bit too flat for my liking, and the action scenes were a bit too fast or hazed over to catch my attention. I’d recommend these to younger readers, definitely–or people seeking snarky, tongue-in-cheek paranormal fiction.