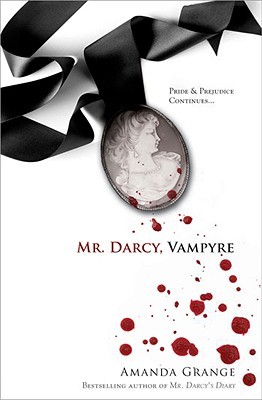 My hand is trembling as I write this letter. My nerves are in tatters and I am so altered that I believe you would not recognize me. The past two months have been a nightmarish whirl of strange and disturbing circumstances, and the future…

If anything happens to me, remember that I love you and that my spirit will always be with you, though we may never see each other again. The world is a cold and frightening place where nothing is as it seems.

Rating: 4/5 Stars
Quick Reasons: a paranormal, vampiric continuation of Pride and Prejudice (I can’t help it, I LOVE these characters! I’m obsessed); unique and interesting vampire lore I’d have loved to learn more about; thrilling action; a sense of mystique, like dreaming

“No”, she wanted to say. ” I don’t want you to care for me, I want to be with my husband.” But nothing came out. She turned beseeching her eyes to Darcy and she saw him as if from a great distance, through a distorting glass, but his words were firm and clear. “She has no taste for your company,” he said.

Hers, thought Elizabeth. He should have said hers.

“Why should I?” asked the gentleman.

“Because she is mine,” said Darcy.

If you’ve been following my reviews for a while, you’ll know without my telling you that I have a HUGE obsession with all things Pride and Prejudice. Someone should have warned me, when I first set out to read the book (and then, watch the 2011 film!) that it would be something akin to chocolate for me: I just can’t get enough! I suppose it helps that the cover for this particular reimagining is absolutely gorgeous.

The writing for this is much like that from the original Pride and Prejudice: elegant, verbose, and breath-takingly exquisite. I found myself slipping back into the world, its traditions and customs… Everything about this read leaped to life for me from page one. Because this takes place just after the wedding of Elizabeth Bennet and Mr. Darcy, and they leave Hertfordshire to travel on their wedding tour, there were some characters I sorely missed seeing in these pages… but seeing the relationship grow and mold, given the secret Darcy has been hoarding for decades, made up for it.

There are a TON of fresh, new faces making an appearance here. I found, at times, that Elizabeth suffered from morose and depressed moods I couldn’t quite connect with or understand—they moved so quickly from one place to the next (though in reality, “quickly” means a matter of weeks in the course of the book) that I sometimes felt a bit of whiplash. This also made it difficult, at times, to keep up with what was happening. If I have on complaint for this read, it’s that one character who shows up repeatedly is not thoroughly or adequately explained; he seems more a device to keep the plot moving than to bring anything substantial to the story. He’s a pawn, really, to get the characters from point A to point B. I wish he’d been more fully explored.

It is clear, though, that Amanda Grange has done her research and done it well for the time period. While we were privvy to several different cultures and traditions, each were well-examined (she even details the differences in fashion between the regions!) and really helped to pull me deeper into this world and enable me to see it more clearly. I had a ton of fun reading about the adventures—though I rather hoped to have a bit more climactic ending than we were given! Amanda Grange detailed (briefly) how the vampires in this world differ from those we are more familiar with, and I wish we’d been given MORE glimpse into that other world in this read—why couldn’t Elizabeth have found out sooner what she married? Why did the ending, with a magical cure, feel more like a cop out?

For the moment she was caught between the two worlds, neither one thing nor another. She would be sorry to let the former depart and yet she was longing for the latter to arrive: a new name and with it a new world and with it a new life.

Regardless, I enjoyed this read well enough to not be real bothered by the things I detailed above. This was a fun, suspenseful reimagining of a world I’ve become deeply enthralled by, and I am happy to have picked it up! I’d definitely recommend to lovers of Pride and Prejudice or its many variations and retellings—this is one you shouldn’t miss out on!

5 thoughts on “A Review of Mr. Darcy, Vampyre, by Amanda Grange”