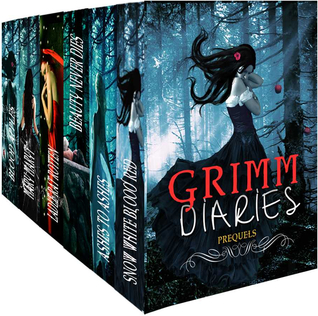 What if all you knew about fairy tales was wrong?

Warning: these Grimm Prequels are like snap shots of a magical land you’re about to visit soon. I like to think of them as poisoned apples. Once you taste them, you will never see fairy tales in the same light again.

The Grimm Diaries Prequels are short books in the form of epistolary diary entries. They are teasers for The Grimm Diaries. The 6 diaries are told by The Evil Queen, Peter Pan, Little Red Riding Hood, the Devil, Prince Charming, and Alice Grimm.

I was worried, going in to this read, that I might not be as blown away with it as I was expecting. The blurb sounds AMAZING, the idea of these retellings being told from the POV of rather unexpected characters was exciting… I deliberated for several days before deciding to at the very least give this first collection of “prequels” a shot before choosing to either continue with the stories or put them aside.

After reading this… I’m leaning, sadly, toward putting them aside.

I wondered why you didn’t burn the original scripts, instead of rewriting them. You must have figured out that sooner or later, someone would dig up the truth and expose you. Altering the stories was the smarter solution. You let children believe that vampire bites were resurrecting kisses, and that glass coffins were made for sleeping beauties, waiting for a prince to come and kiss them awake.

So, I was SUPER impressed with the “prologue” and the first prequel story. They seemed well-put-together, the prose was poetic and lyrical… I LOVED the Queen of Sorrow’s story, the ideas thrown around about Snow White and her true nature. It was all so beautifully crafted, I was enthralled—and while I knew the writing was a BIT shoddy around the edges, I ignored it for the captivating words being woven around me. The first two sections? Really worked for me. I was really excited about continuing on… until I started the second prequel.

Because somewhere between the end of book one and the beginning of book two, something shifted in Cameron Jace’s writing style. Dialogue was awkward and realistic at times: the characters repeated the same things over and over, or spoke in ways I couldn’t understand. I get they’re fairy tale characters, but…they should be able to hold a conversation like normal people? So why don’t they? The plots became wildly “spontaneous”–and by this, I mean they were all over the place. There was often little explanation and answers weren’t easily grasped by readers. The writing became rushed, instead of prolific and poetic. It began to fall flat.

“I thought so,” I said under my breath as I walked out. “Every child’s dream is to push a button and kill imaginary friends.”

I enjoyed the creativity Cameron Jace showed here. There were many times I found myself going… “Huh. Why hadn’t I thought of that?!” Which, if we’re being honest, is ALWAYS a good thing in a piece of writing. I had fun reading the many different alterations and experiments Cameron Jace used throughout the stories—there were a lot of “secrets” waiting to be uncovered or stumbled upon.

I feel, though, these prequels MIGHT have too many characters to focus on. There are so many different voices, so many different individual stories being woven here—I feel like Cameron Jace’s attention was unfairly and unequally divided. It’s easy to tell at times which characters/stories were more invested in, and which got the short end of the stick in the end. This made reading these first six prequels difficult and frustrating for me. I just wish, I guess, that there were less characters and more STORY, if that makes sense? Of course, they’re teasers, I get that…but that doesn’t mean the quality has to fall short.

A while later, we held hands. I liked it, still gripping my scythe in the other hand. Like the wolf boy said, maybe that was how relationships worked. A girl had to have her scythe behind her back, and a boy had his moments of uncontrollable hunger.

So… I enjoyed these for their creativity and unique ideas, but I was frustrated with them at the same time. I don’t think I’m going to be continuing on with this series—at least not at this time in my life. Maybe in the future I’ll give them a second shot, but for now, it’s time to move along to something else. I’d still recommend to lovers of fairy tale retellings, unique and inventive “twists,” and dark/edgy story telling. Just because thiswasn’t for me, doesn’t mean it’s not for you!