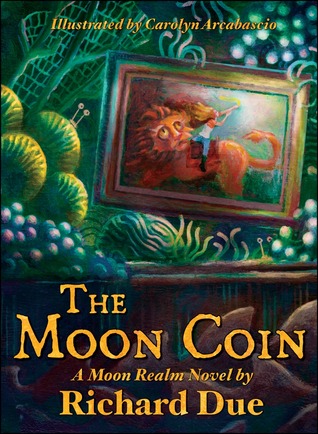 The Moon Coin & The Dragondain. Epic fantasy for ages 9 to 99. Visit the Moon Realm.

These are not your parents’ bedtime tales.

Telling a wicked good tale is a talent, but making it sound believable is a gift. Even as young teens, Lily and Jasper Winter still love their uncle’s bedtime tales. But they don’t believe, as they once did, that the tales he spins are true, or that his fantastic paintings are from places he’s actually been . . . that would be childish.

Lily and Jasper are supposed to stay out of trouble while their parents search Ebb’s study, but his mansion is full of distractions. A Tesla generator thrums in the basement. Prismatic electrimals drift lazily around walls resembling underwater reefs. Then Oscar, a fuchsia-plumed flying seahorse, leads the siblings to a secret room, where the mystery of their uncle’s disappearance deepens. They’ve never seen Ebb without his golden necklace, yet there it is, with a curious coin dangling from it.

That night, Lily’s careful examination of the coin yields unexpected results. To her surprise, it transports her to the Moon Realm, the setting of Uncle Ebb’s bedtime tales. Lily is thrilled to meet the horse-sized, leonine Rinn and the lunamancers of Dain. But something is wrong. The inhabitants of the moons are no longer allies, and the heroic characters from the tales either don’t exist or are known only as myths. Worse, one of the moons appears to be dead, haunted by an evil villain named Wrengfoul. And no one seems to know what’s become of Ebb.

When I was told this book was one of Kindle’s Daily Deals, I decided to take a chance on it. I wasn’t too sure what the story was about—I went in not knowing much of anything, except the title was cool and the cover looked like a lot of fun.

I wasn’t expecting to be swept away; it became clear, pretty early on, that I was very, very wrong. That I had underestimated the power this story would have on me.

There is something nostalgiac about opening your mind and stepping BACK into mid-grade stories. I have only read a couple of them recently, but The Moon Coin helped me realize that perhaps I should be reading them more often.

The writing in this, first off, is gorgeous. Things are so clearly explained, I felt I could see exactly what was being described at any one time—which is, sometimes, part of a story that gets lost in the mayhem of putting plot to page. While there are, admittedly, a few moments that seemed hastily written, overall the plot is very action-driven, the characters endearing and intriguing, and the story enthralling. I felt as if I was being told a bedtime story, instead of merely READING about one.

There were a few moments I feel could have been written differently or reworked—though, to be honest, that’s to be expected with a first novel. The “kinks,” as I’d call them, were overall not noticable and didn’t detract from the story in the end.

Richard Due has an intriguing, unique voice, and wields his words with expertise throughout. I found myself flying through the pages, all senses engaged, my curiousity and NEED to know what happened next pushing me quickly through the read. This is a book you won’t be able to put down once you begin; it drags you in by both feet, and keeps you entertained throughout. The subtle hints of humor paired with a sort of “coming of age” or “discovery” really made this a top-notch read; the main protagonist, Lily, learns so much about herself—and also about her Uncle Ebb, the hero of her childhood, the master weaver of tales. But it’s the OTHER side of this coin I appreciated most: because Lily also discovers, on her journey, that perhaps Uncle Ebb is not quite as “heroic” as he appears. That he just might be human, after all.

The exploration of oral narratives/bedtime stories, the blend of childhood fantasy and the realities of the world, pushed this read into my favorites, matching those like The Twistrose Key by Tone Amjhell or Harry Potter by J.K. Rowling. This was an enjoyable read; I definitely recommend it, and will hopefully be reading book two in the near future.

4 thoughts on “A Review of The Moon Coin, by Richard Due”