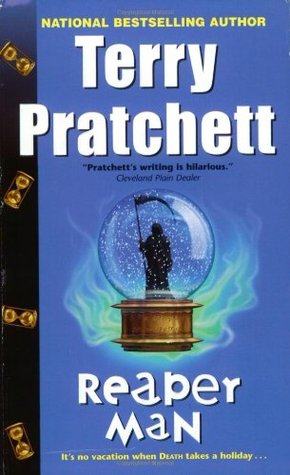 They say there are only two things you can count on …

But that was before DEATH started pondering the existential. Of course, the last thing anyone needs is a squeamish Grim Reaper and soon his Discworld bosses have sent him off with best wishes and a well-earned gold watch. Now DEATH is having the time of his life, finding greener pastures where he can put his scythe to a whole new use.

But like every cutback in an important public service, DEATH’s demise soon leads to chaos and unrest – literally, for those whose time was supposed to be up, like Windle Poons. The oldest geezer in the entire faculty of Unseen University – home of magic, wizardry, and big dinners – Windle was looking forward to a wonderful afterlife, not this boring been-there-done-that routine. To get the fresh start he deserves, Windle and the rest of Ankh-Morpork’s undead and underemployed set off to find DEATH and save the world for the living (and everybody else, of course).

Rating: 5/5 Stars
Quick Reasons: Terry Pratchett–need I say more?!; the character Death; so many chuckles; for the love of all things funny, this is great

I started reading Terry Pratchett several years ago, and let me tell you, it’s one of the best reading decisions I’ve ever made!

This book is probably one of my (current) favorites of those I’ve read; I’ve always been intrigued and fascinated with Death (the character!) and this book is just…asdfghjkl;!

There’s such a finely drawn mix of humor/comedic relief…and heavy, eye-opening wisdom. Terry Pratchett knew his craft, and used it well, writing these books with a profound, heart-jerking sense of truth. The world-building, throughout all of his books, is gorgeously done; we get just enough of the world each journey to understand what’s going on with the current characters/set up any future stories, while still being compelling, easy-to-handle reads. He doesn’t overwhelm us with information; instead, he weaves the bits and pieces together like children lining beads up on string.

On top of this, the writing is absolutely astounding! There are so many beautiful turns-of-phrases and gorgeous images, I’d be remiss to say it’s EASY to pick out a favorite quote. It’s not possible, there’s just too many! Of course, most of my favorite quotes were those that could ALSO translate over to the real world; Terry Pratchett was a master at touching upon current/past events in eye-opening ways. I found myself reconsidering the world several times over in just this read alone!

The characters are SO complex and well-considered. Terry Pratchett put his heart and soul into these stories; you can tell this almost immediately. There are no “unimportant” characters; EVERYONE mentioned here makes at least one more appearance, and all of them for a specific purpose. I mean, even a ROOSTER has a place–and a personality–in this story! While the main characters DO get more of the spotlight, there are no wasted moments or half-scripted words. Everything matters…and builds up to a concussive, profound ending.

Terry Pratchett is one of those authors that I think EVERYBODY should try at least once…because there’s something for everyone in his writing. The chuckles will ensue from page one–just hope you’re alone when they do, because there’s no explaining the crazy awesome that is Terry Pratchett’s Discworld!